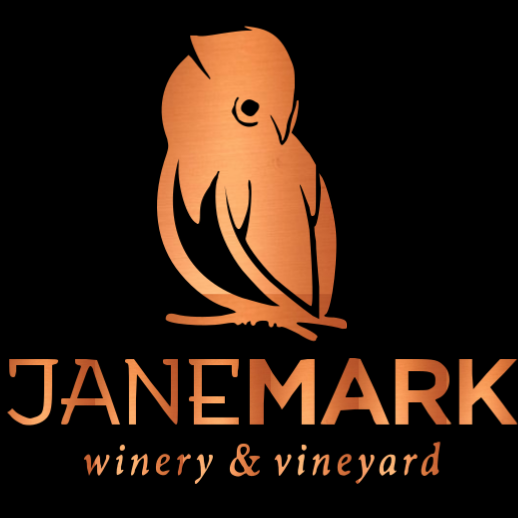 Janemark Winery & Vineyard has two vineyard locations. JWV was initially developed on land that has been in Jane's side of the family after arriving to the United States of America in 1714. When the family settled in Baden, the land was used as a tobacco farm until 1969. In the spring of 2013, Jane & Mark, along with their two sons, Sam & Alex, planted all of the vines in these fields, which include Albarino, Vidal Blanc, and Chambourcin.

JWV’s vineyard at 15200 Baden Naylor Road was established in 2014. It became known as Four Degrees Vineyard because the row orientation is four degrees off from its intended layout. This vineyard is home to our Barbera, Albarino, Petit Manseng, and our tasting barn.

We are proud to produce Maryland estate-grown varieties and share our love for wine-making and knowledge of wine with our customers. We opened for public tastings in March 2017.

A beautiful medium-bodied dry red wine aged in American oak for 12 months. With notes of cherry, chocolate, and plum with a velvety smooth finish.

A dry medium-bodied, old-world style red wine with herbs, flowers, and red fruit on the nose with raspberries and black pepper on the palate. Aged in one year old American Oak barrels for 12 months.

This rose’ wine is sweet and smooth and bursting with fresh ripe fruit with crisp acidity that balances the sweetness and upfront fruit aromas.

A semi-sweet wine of tantalizing acidity with passion fruit, peach, and honeydew melon on the palate and aromas of lemon and pineapple. Made in 100% stainless steel tanks.

A dry light-bodied white wine with mouth-watering acidity. Aromas of lemons, limes, and pear with apricot and apple on the palate.

Barrel fermented and aged on the lees for 12 months in American and French oak. Velvety on the palate with flavors of ripe pear, butter, and vanilla that intertwine in a soft, creamy finish.

An off-dry wine with aromas of tropical fruit. On the palate, there are crisp flavors of melon and pear and ends with a bright acidity. It is blended with 9% Albariño. Made in 100% stainless steel tanks.

An off-dry white wine with pineapple and spice on the nose and hints of apricot, peach and cantaloupe on the palate. It is elegantly balanced with a long finish. Made in 100% stainless steel tanks.

This is a dry medium-bodied red wine. It has fruity flavors of cherries and blackberries, good acidity, and nice soft tannins. It was aged in French and American oak for eight months. A great table wine.

A nice medium-bodied dry wine with flavors of cherries and blackberries. On the palate, it has hints of spice, earth and layers of dried cherries. It was aged in French and American oak for eight months.

This new variety was created in remembrance of Mark’s father, John William Vogt, also known to our boys as Pap Pap. Pap Pap served as a Lt. Colonel in the United States Air Force and flew over one hundred missions in WWII, Korea, and Vietnam. Janemark Winery & Vineyard’s initials, JWV, are also in his honor. We offer a military discount to active and retired military members to thank you for your service and sacrifice for our country. This one is for you Pap Pap, we miss you greatly!

This is a sweet dessert wine made from estate grown Vidal Blanc grapes. It has floral notes on the nose with flavors of melon and tropical fruit. It's balanced acidity makes it a great wine for sipping with friends, or serving with spicy food. It's also delicious with steamed crabs!

This is a dry medium-bodied red wine. It has fruity flavors of cherries and blackberries. It's well balanced acidity and nice soft tannins make it a great wine to have with dinner. It was aged in new French and American oak for eight months.

This is a sweet red wine. It's soft on the palate with flavors of blackberries and cherries. If you don't normally drink red wine, you should try this very elegant, soft red. It's perfect for sipping on the porch with friends! Serve chilled.